It hasn’t been seen on TV in more than four decades, but it’s one of those unforgettable classic commercials. I first saw the spot at the tender age of four, and it gave me nightmares for months. It’s been written about in newspaper articles, mentioned numerous times on the web and even made the AM Top 30 playlist in Pittsburgh. But despite its cult status, the commercial has been unavailable for viewing for years---until now. After a thirty-year search I’ve finally located my personal Holy Grail- the Red Rose Tea commercial with the Marquis Chimps.

Our story begins in the 1940s with European acrobat extraordinaire Gene Detroy. Billed as the “Vagabond Of The Wire,” Detroy earned his living as a tightrope walker in the English Music Halls and carnivals. To keep him company, Detroy adopted a pet chimpanzee. When a featured act on the program failed to show, it was suggested that Detroy go onstage with his chimp. They were a resounding hit, so it wasn’t long before other chimps were recruited. Detroy named the new act Marquis and Family, because he thought it sounded elegant.

In the 1950s Marquis and Family were the darlings of England’s Music Halls and top performers in the Parisian nightclubs. Detroy taught his chimpanzees how to sew, roller skate, punch a time clock, eat with a knife and fork and many other crowd pleasing tricks. Comedian Danny Kaye discovered the act on a European tour, and was so impressed that he signed Detroy and company to appear with him in the Danny Kaye All-Star International Show on Broadway. 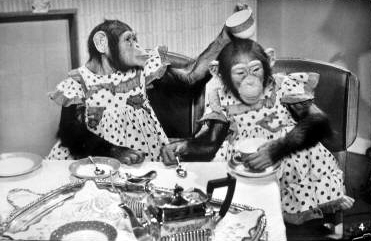 In 1960 the Marquis Chimps, Enoch, Susie, Baron and Hans were signed to appear in a trio of television commercials for Brooke Bond Foods, makers of Red Rose Tea. The commercials featured the chimps in parodies of a Wild West shoot out, a golf match and the most popular, a wild nightclub with a swinging chimp band singing the praises of Red Rose Tea.

The commercial opens outside of the Savoy Ritz, an after hours club. Wild jazz music permeates the outside air. As we enter the joint we see the band; a drummer, piano player, bass fiddler and trombonist- all chimpanzees, nattily dressed in plaid suit coats. A chimp couple dances frenetically on the dance floor.  Cut to the lead vocalist of this wild, primate quintet who chants, “Eeeee, Yowww Yowww, Red Rose Tea! Red Rose Tea!” The spot ends with the drummer beating his drumsticks together, while shouting “Red Rose!”

Later that year The Marquis Chimps appeared in the Three Stooges film Stop! Look! and Laugh! In 1961 Enoch, Charlie and Candy appeared with Peggy Cass and Jack Weston in the short-lived ABC TV series The Hathaways. The chimps made eleven appearances on the Ed Sullivan Show and were popular guests on The Hollywood Palace, Here’s Lucy and The Jack Benny Show. The Marquis Chimps returned to Broadway in 1963 in a revival of Danny Kaye’s All Star International Show. 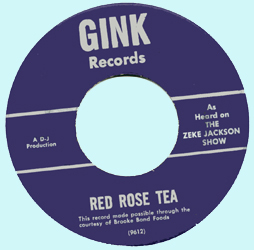 In 1968, WARO Pittsburgh DJ Zeke Jackson played the music track of the Red Rose Tea commercial on his radio show. In a year when The Beatles, Cream and The Doors were in the top 30, Jackson received so many requests for the crazy tune that he and local record producer Paul Mawhinney pressed and sold one thousand 45 rpm Red Rose Tea records, which quickly sold out. The disk was released under the GINK label, named after the DJ’s mother-in-law, and featured the same song on the flip side.

Throughout the 1970s The Marquis Chimps appeared on television, in nightclubs and even the Ice Capades. In the 1990s the chimps, trained by Dan Westfall, were regulars in The Fabulous Palm Springs Follies stage show. Westfall, nephew of original trainer Gene Detroy, now runs a sanctuary for homeless and unwanted ex- show business primates, its most famous resident being Cheeta the chimpanzee from the Johnny Weissmuller Tarzan film series.

I’ve been a 16mm film collector since 1970, and high on my wanted list was the Red Rose Tea commercial. For over thirty years I’ve placed ads in film collector’s periodicals, scoured film lists and checked out every videotape commercial compilation that I could find for the elusive spot. I just had to see once again that screaming, singing chimp that gave me nightmares as a tot. I finally hit the jackpot when I received a trade list in the mail from a fellow collector. After a fair amount of haggling, we struck a deal. About two weeks later the film arrived. I opened the package and quickly threaded the small plastic reel of film thru the projector. When the flickering black and white image of the Savoy Ritz nightclub filled the screen, I immediately flashed back to when I was four years old. Only this time I wasn’t scared. A little switch in the dusty part of my brain clicked on, and suddenly I recalled every wonderful scene and every magical note of the mini music video. I rewound the film and played it again. And again.

Since posting about my recent acquisition in a couple of newsgroups, I’ve received  hundreds of emails from people requesting to see once again the Red Rose Tea commercial. I am more than happy to comply. Enjoy!

Be sure to check out Dan Westfall's C.H.E.E.T.A. Primate Sanctuary and find out how you can obtain an original painting done by the original Cheeta the Chimpanzee, while helping Dan with his noble efforts to rescue and care for unwanted ex-show business primates.